Zoning and Urban Land Use Planning for Drones

Just prior to my last stint of working in Somalia, I purchased a small consumer drone to use as social research tool.  Unfortunately the landscape had changed drastically since my last time in Mogadishu, and it was impossible to use, in particular because I am terrible at flying the damn thing. But I have since invested many hours into piloting the UAV to explore its utility as a research tool for urban planning and design.

Last weekend, a small disaster took place when I lost the signal to the UAV. The drone drifted out of sight and crash landed.  I had no idea where. It took several hours to find (on a building rooftop, I couldn't see it, but I found its WIFI signal), and even longer to recover (24 hours). At some point on Twitter, Constantine Samaras, raised a significant point:  Perhaps this situation could have been avoided if I was in a no drone zone. But what does would that look like? 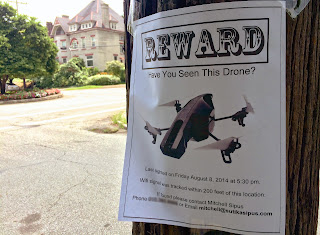 In the United States, airspace above 700 feet is Federally restricted.  Airspace below 30 feet is considered part of individual property rights, meaning that when you own a piece of land, you also own the 30 feet of air above it. Ownership of this airspace is occasionally able to be sold for provide through a transfer of development rights. But what about the airspace between 30 and 700 feet?  At present, the FAA has restricted the use of drones for commercial use but amateurs are free to fly.

Some cities have already taken progressive steps concerning the legality of drones. The city of Evanston Illinois has passed a 2 year ban on drone use in the city for use in warrantless surveillance. This is a good thing. Carrol county in Maryland is looking for similar legislation on the use of drones by law enforcement. There was even recently a temporary event ban during golf tournament in North Carolina.  But existing UAV zoning laws are "all or nothing" in design, they do not make use of the opportunity that drones can provide in creating new markets, improved public policy, and better design for communities.

Zoning for Drones
In general, I'm not a big fan of city zoning.  I admire its intention, to make sure that the overall quality of urban life is consistent with high standards of physical and mental health.  We do not want the aluminum factory next to the children's playground or the speedway motor park in the residential neighborhood.  We do need a legal instrument for communities to make decisions about what they want to look like and how they need to function.  Yet overall, I find my city zoning is poorly conceived.  I am highly supportive of health standards, environmental regulation and taxes, but I see zero advantage toward regulating the values of a population (such as zoning concerning bars or adult services) or the economic geography as such zoning only reinforces the values of those who hold power, not the people who constitute the community.  Likewise zoning for residential vs. commercial use tends to put more strain on the landscape, increase traffic, increase pollution, and reduce the distribution of wealth. Zoning should not hinder social mobility, yet it can and does.

Therefore, to approach zoning for drones, it is important to examine the issue from multiple points of view.  After all, the goal is to create a regulatory framework that will maximize the ratio of nuisance to utility in favor of people at large, not a particular social group or economic class.

Example UAV Questions to Consider
Is the UAV big or small?
Loud or quiet?
Does it have a payload or a camera?
Is it operating according to a predefined flightpath (using GPS waypoints) or is it freely piloted?
How fast and how high is it?
Is it for commercial or amateur purposes?

Example Site Questions to Consider
Is the site of high or low pedestrian traffic?
Does the site contain socially vulnerable or critical security infrastructure (schools, power plants etc)?
Does the site consist mostly of public or privately owned property?
To what extent is the airspace already cluttered and at what density?
Is this an area of high or low diversity in land use?

Example Population Issues
Is this area a public space or private space?
Is what is the privacy expectation in this space - for example, on a beach?

To recognize the array of drone designs and use designs is to realize that an affective zoning solution is flexible to support the advantages of the UAV but with limited interference upon bystanders. Conversely, it is important to insure that UAV operation is not disruptive to the general activities of the population.  Ideally, UAV operation should be able to operate "in the background" of day-to-day life.


General Guidelines for UAV/Drone Land Use Zoning Laws
While thinking about zoning for drones, one of the first questions that comes to my mind is "what will that look like"?  After all, 2-dimensional arial map is insufficient to capture the particular sense of space that will be used and affected by a UAV.  An advantage of contemporary design and modeling is that we do not need to restrict zoning maps to a 2D surface, but can draw these maps in the air, to model them above cities and within them.  A zoning map for drones should not only take advantage of modeling the airspace, but should take into consideration the variations of time.  For example, an area that might restrict private drone use from 9-5 could lift the ban from 30-400 feet after 5pm and 400-600 feet after 10 pm.

Implementation
It might seem abstract to place an imaginary 3D geometry around a building to restrict flight patterns. But for those who are already flying drones, it is no unimaginable.  Furthermore, providing the information online (such as a downloadable CAD file) for a drone operator to layer onto Google Earth or other GIS software would easily remedy the situation.  GPS and time sequencing can even be programmed into flight patterns.  It might seem abstract and hightech, but 3D mapping of airspace for drone use has few hurdles and requires no new technology.


Case Study: Urban Planning for UAVs in Chicago
To explore this idea, I have rendered a rough concept drawing of drone zoning in the parks bordering downtown Chicago.  Basing the idea off of a traditional traffic light, green areas are free-use, yellow and orange maintain various restrictions according to the time of day and day of week, while red areas are restricted at all times.


Open Droning
The green zone is near Buckingham fountain.  This area is a wide open space, with zero infrastructure of critical value.  It should be realized that we design areas where free drone use is available so as to offset the general distribution of restrictions.  A greenspace, therefore, should permit the widest amount of flexibility and opportunity.  Likewise, in such spaces we want to reduce the likelihood of losing the drone or disrupting others in the event of an accident.  Accidents will happen, so it is best to permit a space for those accidents to happen with limited consequence.

Limited and Restricted Drone Use
In the image above the football stadium has been recognized as a "zero public drone" area.  In this space we can imagine private licensing options for droned cameras and advertising initiatives by the stadium and partners.  However, unaffiliated individuals should not have the right to use their drone in this are.

The yellow and orange spaces represent the Field Museum, the Shedd Aquarium, Aviary, and Observatory.  For the sake of the example, I have suggested that these properties contain their own particular rules that change according to the day, season, or event.  This is not a unreasonable regulation, given that it is common place to create zoning in a similar manner for public parking during weekdays, sporting events, and even according to the weather.