Detroit Urban Development and Communication with a Drone

Recently while assembling a project in Detroit Michigan, I came across some videos utilizing a consumer drone to document parts of the city.  They are truly gorgeous.  This particular one below documents the Heidelberg Project, an neighborhood-wide art installation by Tyree Guyton.

I've been a fan of the Heidelberg Project since my days in art school, when I learned that Tryee was using his method of found-object art construction to highlight the excessive needs and attention of his neighborhood. Adjacent to the abandoned Packard plant, and situated among endless blocks of abandoned buildings, Tryree constructed the Heidelberg project as an act of beautification, neighborhood protest, and empowerment.  For many years people were outraged by his actions, but as it brought attention to the landscape, one could argue that the Heidelberg Project has been an important catalyst for change, now that Detroit is on an upswing.  If you cannot view the embedded video, find it here.

Recently a series of arsons have been consuming this urban installation. Rumors abound regarding the motive and source of the fires and investigations on on-going.  The drone footage captures the landscape just before the most recent fire. 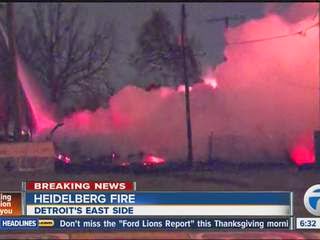 I've theorized in the past how drones could be used by urban planners, yet the documentation of Heidelberg illuminates a new, and fairly simple prospect.

It is difficult to convey the qualitative, intangible feeling of vast spaces.  While photography and film has the ability to convey strong emotion, it does not necessarily have the means to do connect a viewer to an entire neighborhood.  The power of shaped and empty space is the ability make a person feel large, small, connected, or alone. Standard videography does not effectively transfer the essence of space to a viewer.  Yet perhaps this is a new opportunity for drones.

When I watch the video above, irregardless of any music, I get a sense of the atmosphere, I get a sense of the weather, and I get a glimpse of what it is like to move through the installation.  I get an idea what it is like to participate with the space, from the physical perspective of a small child, as a grown adult, or even perhaps from within the imagination of Tyree, who arguably has a more concrete vision of the installation than anyone.  He knows its details yet can see the large picture of interlocking pieces.  As a viewer and participant, we can eventually acquire an equally sophisticated relationship with the space, but to transmit this relationship is a challenge.  The drone imagery does not solve that problem, yet it may get us a step closer toward communicating the ethereal.  Perhaps drones will do more than cause new problems, perhaps they will give us the chance to be one step closer of experiencing the multilayered syntax of place.  That is a powerful thing.
at February 13, 2014