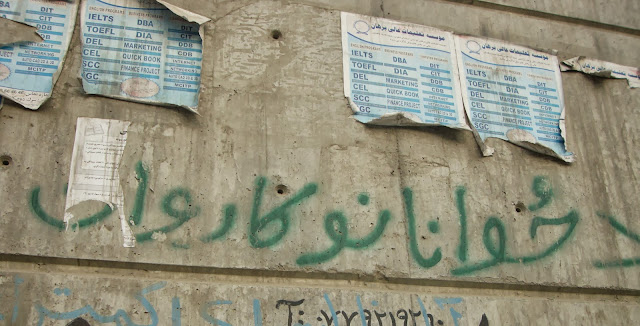 Last spring I documented informal graffiti and political imagery throughout Kabul.  The result was over 1000 records of graffiti, which after carefully combing, resulted in about 800 data points.  Each data point is classified according within 15 different categories.  These categories include key words, language used, translation, political association, ethnic association, surface description (public building, private residence, private business etc.) and so on.  The goal was to identify geographic points of emerging social tension, utilizing graffiti as an indicator of resistance among youth.  Then I got distracted by other engagements.

But I've recently returned my attention to the matter and have started running the analysis.  The map below reveals one of the recent findings of the project, over lapping the linguistic distribution of messages with the ethnic and political content.  The yellow identifies graffiti that is purely written in Farsi, while the Red concentrations identify concentrations of Fari and Pashto.  Farsi is the dominant spoken language in Kabul, and it is interesting to note that Pashto graffiti is never isolated, but always located amid dense clusters of Farsi. (Note: If the embedded map does not load in your feedreader, please go to the original article source here).

The points on the map where a green square sits on top of a red section identifies sections where there is a linguistic friction combined with an overtly political message.  Based on these two variables, the intersection of the green square and the red cluster are areas of highest social friction.

Notably, some of these locations have been known points of resistance in the past.  The cluster in the lower left (just above Qala-e-Shada) hosts Kabul University and a public park that is frequently the site of protest rallies.  The two square situated directly below the "U" in "Kabul" was the site of the Ashura suicide bombing in 2011.  It is possible that using only these two variables, that the current finding is mere coincidence.  But as several classifications of data remain , it will be possible to drill down with continued analysis.

I'm particularly curious about the concentrations that are not presently linked to a previous act of protest or violence.  What about these sites creates such a hostile and turbulent environment?  As all the data was collected in March/April of 2013, I am now running the project again.  I am using the same techniques and plan to capture the same size data-set.  I hope to see how the pattern changes, and more importantly, I hope to see where it stays the same.  By identifying the location of sites that do not change, then I can follow up with closer qualitative investigation of those sites.  Also by running the study again, I hope to to get closer to a better question - not where will points of insecurity or protest occur, but when?