Deep Water in a Geography of Conflict

I once watched an engineering team install a well in a high-traffic area of a refugee camp in Kenya.  It was an easily accessible public space and it was close to a road making the job easier to bring the equipment and install the well.  After installing the well, the team made sure it worked, and went on to their next project, I believe somewhere in Thailand.  But a few strange things happened during the project and for a long time afterward.

1.  Many mornings the team would arrive to the site and discover the well had been destroyed.  In the middle of the desert with few other working wells nearby, why anyone would repeatedly destroy this precious resource?

2.  At times while working the project, children would throw rocks at the team, and their parents would simply look on, allowing the children to abuse the people who had come to provide a better quality of life with clean, accessible water.

3. When the project team finished the project (clearly after many delays) they exited and people began to use the well.  Within a matter of days there were violent, physical fights among locals at the site of the well.

What does this mean? From the outside, it is easy to say that the engineering team was doing a good thing in the refugee camp and that the local population was disrespectful out of heathen ignorance. Unfortunately stories like the above tend to fuel racism and prejudice among people in developed nations more than actually teach the deeper lessons.

Unpacking the situation is not easy.  To break it down I've composed the simple table below. 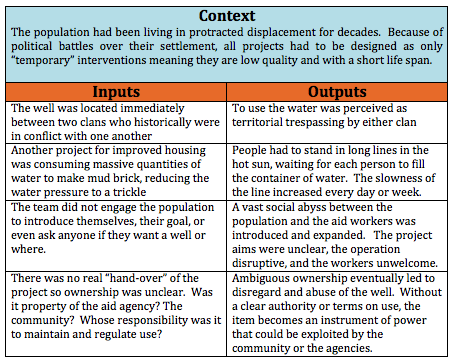 Outcomes
Without realizing it, the engineering team had thrust themselves into the spatial center of a long-standing problem of inadequate government policy and local social tensions.  Not only was the project in the geographic center of two populations with a history of conflict, but a series of poorly implemented technologies in the past left these populations with an immediate distrust of any new intervention.  In addition, by not formally interacting with the people living near the well at the outset of the project, their project was seen as an intrusion not a benefit.  Certainly another place to access water is appreciated, but many in the community knew that it would be another finite resource to drive arguments and conflict, not an asset.  But why tell this to the project team?  After all, the engineers were not even polite enough to introduce themselves let alone ask for advice.  Clearly they were the experts.

Beyond
The lessons of this case study should be easy to recognize.  The most basic infrastructure project is not merely a technical process, it is also a social process.  There may have also been actions within the community to mitigate the future problems.  For example, it is possible that the nightly acts of sabotage were intended to force the engineers to create a better and more resilient water well, considering the long history of inadequate infrastructure in the camps (see the context of the chart).  Maybe previous complaints had been ignored?  Unfortunately we can't be certain.

If the team established valid, working relationships among stakeholders in the water well project it would have prevented many of the negative consequences.  It would not have required extensive work by the project team, but maybe one week of interacting with the locals, asking questions, and learning about their lives could have led to a more strategically located intervention with clear lines of ownership, and the cooperation of the community in the project creation.

The community doesn't necessarily need to be part of the development process, but they certainly have the right to know the project process and objectives in advance. Where relationships cannot be established (such as the long history of conflict between the tribes), at least discovering and acknowledging those obstacles could have provided with the engineers the data necessary to create a better project design.  We cannot know if it may would have become more successful, but at the minimum, it would not have introduced new problems.
at September 04, 2013 No comments:

Democracy 2.0 - Asking the People in Syria for their Input 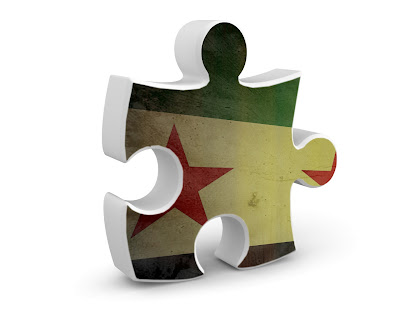 Before taking any further steps in Syria, why not ask the people in Syria what they want to happen?Sounds outlandish, but with a little imagination and some basic technologies, its completely possible.  It even has a precedent.

Many city governments such as in New York City have discovered the value of combing the landscape for metrics and using this data for city management while organizations like Datakind specialize in extracting and interpreting information from neighborhoods. From mapping the spatial distribution of poverty at the World Bank to Kenyan citizens reporting violence with tools like Ushahidi, lots of organizations have discovered the value of obtaining and leveraging local level information to make informed decisions.

The technologies used to collect and organize this data do more than provide a picture to experts. These technologies also open the floor for broader participation.  I am in no way saying that technology solves all problems, but as a tool for communication, it can make voices heard that would have otherwise remained in the shadows.

At this moment the world is in panic and American's are distraught over the decisions regarding Syrian intervention.  The decision making process is reliant now upon the influence of popular opinion, congressional interests, media storms, intelligence collection, international agreements, and back room discussions.  Yet among all the talk, the most important voice has been excluded from the conversation - the voices of people living in Syria.

Engaging an entire national population, let a alone a population under pressure from the horrors of war, is no easy task. But it is possible, at least to a degree, to use a mobile phone technology like rapidsms for citizens to vote by text message just like popular tv programs that ask audiences to vote for their favorite performer.  I was informed this morning by a friend with family in Syria that the mobile communications infrastructure in Syria is not steady, but over the last year it has been working off and on.   With a little ingenuity it would be possible to create a window for voting and to filter messages.  A little bit of scripting and it is possible to cancel multiple-votes from the same number and even to map the distribution of votes across the landscape.

A simple text message voting system will not capture popular opinion of everyone in country, but it can provide a statistically viable sample.  More significantly, implementing a tool such this could refigure the entire future of foreign policy and global security.  International policy makers already have the tools at their disposal to engage those populations most affected by military intervention, leaving imagination as the only missing piece to the puzzle.
at September 01, 2013 No comments: