Planning for the Future Reconstruction of Syria from Chaos and Complexity 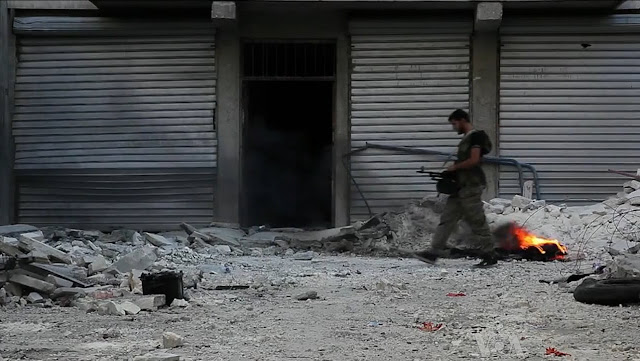 The world is abuzz over the current civil war and the possibility of external military intervention in Syria.  While the conversation is primarily focussed on the use of chemical weapons in violation of the Geneva Charter, there has been little discussion about the long-term implications of the civil war, regardless of the role imposed by outside militaries.  What will be the result of so much bloodshed and how will the nation rebuild?  In what form?

The severity of physical and social damage established in the last two years, broad distribution of conflict and the lack of unity among non-state actors within the conflict suggests that the civil war will be a long one, perhaps 10 years or more.   The resolution to this will not be political process as the lack of clearly established leadership among rebel groups positions no one to pursue negotiations with the State.  The massive refugee outflow, consisting 50% of children, weakens the social fabric of the nation and will continue to do so.

If you discover that you are genetically predisposed toward a certain ailment, you adapt your lifestyle to mitigate the future.  You hedge your bet.  Likewise with Syria, the most probable outcome right now is protracted conflict followed by a painful reconstruction process (like Afghanistan).  But if examine the current variables, and measure the inter-relations between those variables, we can attempt to coordinate a strategy toward a desired outcome - ie., less war and more rapid recovery.   Because each variable maintains the same potential as a butterfly to inspire a hurricane, we don't have the control as we do with our bodies, but we do have the ability to better position some social and structural elements in terms of probable outcomes.  If this process were to begin now in Syria, it could potentially lead to a better future.

In this case, the goal is for the war in Syria to play out in such a manner that all relevant resources (community groups, finances, areas of destruction vs. preservation, social allegiances and so on)  are best organized for a rapid and successful reconstruction process.  The variables are numerous and so too are the methods of working with them.  So where do we begin?

The role of strategic planning and development within the battlefield is not new.  As an expansion of the Hearts and Minds campaign of Vietnam, development was heavily undertaken by NATO in the Iraq and Afghanistan and implemented via Provincial Reconstruction Teams (PRTs). The PRTs were designed and operated in coordination with a broader mandate of Counter Insurgency doctrine (COIN). This was not a flawless system, it required massive layers of security that isolated the infrastructure creation process from the populations served, and when the projects were turned over to communities, unsurprisingly the outcomes were not always as hoped. Yet these methods were only viable as a strategy because of the massive allotment of resources.  Furthermore, PRTs had an inconsistent impact across regions and populations.  It is a tactic that will be likely replicated in the future but it simply won't apply in Syria.

In the recent 21 years of conflict in Somalia, intervention was limited to MSF operations, WFP, and other UN backed initiatives typically implemented by local NGOs.  In this regard, Somalia is a better region of comparison to Syria.  The problem here is that such agencies are designed only for humanitarian relief. This is essential, but it doesn't facilitate a resolution as much as institutionalize a process of triage across a fragmented society.  The inequitable distribution of services doesn't maintain a status quo as much as introduce a new variable, randomly redistributing the lines of power among a downtrodden population.  Potential outcomes vary from relief to militarization.

Urban Planning and Development In the Syrian Conflict

Typically when I tell people that I apply urban planning methods to mediate violent conflict, people imagine I'm referring to zoning and bike lanes.  Sigh... thats so boring.  But I suppose on the imaginative level there could be something here as one could argue that territorial patterns of warfare form emergent conflict zones, interconnected by supply corridors - don't forget that al-Shabaab had covered Mogadishu with a complex network of trenches to quickly mobilize troops and supplies yet also grinding the speed of territorial changes to a halt.  Yet these concepts in the current state of the conflict can only apply to analysis and not to planning outcomes.

A more pragmatic approach is to better understand the diversity of stakeholders in the conflict, as the fragmentation of non-state actors is a major obstruction to the peace process.  This obstruction was likewise a major obstacle in Afghanistan and it is no surprise that the suitcases of money provided by the CIA in 2002 to mobilize diverse ethnic groups for a common interest did not build a sustainable peace or found strong governance.

Expanding and integrating diverse stakeholders is a cornerstone of the urban planning process, and while stable nations have the benefit of easily organizing community groups or legal proceedings,  it remains possible to mobilize stakeholders in hostile territories.  A key feature of this "non-rational" process is that it does not necessarily require strong, easily defined internal leadership.  Rather the process only requires an entity committed to the interest of all stakeholders, committed to a win/win outcome, and who can manage an otherwise neutral disposition.  Notably, this entity will not be successful if all authority is founded on outside power (US intervention for example), but rather this entity must have acquired a local, grass-roots level of respect combined with recognition among high-level community leaders.  At the moment, there is no one of this description involved in the conflict. Yet this can change.  After all, the war could take 10+ years so its completely feasible for an individual or organization to emerge to do the work.

Another critical element toward the future pacification and reconstruction of Syria is the role of the internally displaced and refugee populations.  The role of displaced populations could effect rebuilding of Syria in a combination of ways, yet two possibilities are immediately obvious.  When the war in Afghanistan drove thousands from their homeland, many children were left secluded in Pakistani refugee camps where Saudi madrasas promoted Wahabist beliefs, laying the foundation for the emergences of the Taliban.  During the same time, the war in Somalia drove thousands abroad who were then exposed to a variety cultures, educations, and lifestyles.  The return of Somalis in diaspora has made the sudden rebuilding of Somalia a possibility as they return with new social capital to invest.

At present the 1.9 million displaced refugees are primarily distributed throughout Lebanon and Turkey.  While I don't believe those nations would have a detrimental impact upon the refugee population and the long-term psycho-social advancement of the youth, it is unlikely that those nations have the resources necessary to invest.  At present, Turkey is already hosting 200,000 refugees in camps and has 200,000 refugees outside of camps.
As you can see from the map, many of these camps are open, but it is clearly getting stretched to a limit. If it is becomes commonly accepted that the the civil war will be long and drawn out, initiatives to excel the resettlement of Syrian families into new communities could provide the investment needed for the future of Syria to be founded on socially productive and worldly populations.