Should We Paint the Sandbags Pink? Redesigning The End of War 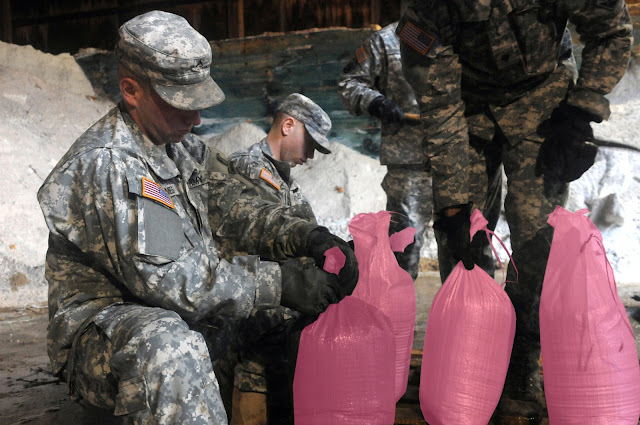 A fundamental lesson within the major literature about counterinsurgency, such as Nagel's How to Eat Soup with a Knife or Galula's Counterinsurgency Warfare, is the lack of institutional memory regarding the end of conflicts.  For whatever reason - social, organizational, cultural or otherwise - popular conceptions of history describe wars as having a messing beginning and a tidy ending.  Images of helicopters hovering over Saigon or masses of WWII soldiers boarding ships homeward bound resonate in the global social conscious.  But it is unlikely that any war in history concluded with the simplicity of closing the cover on a book.

Historical battles were heavily shaped by the seasons, as the winter obstructed movement and in the spring many soldiers would need to leave the front lines to plant seed.  Wars would be resumed once the seed began to sprout, postponed for harvest,  then returned to again until winter.  A quick look at the wars of the 19th century on wikipedia reveals that most wars lasted 4-5 years, but  the wrong impression is given by this list as it provides a nice simple year for the conclusion of every conflict.  In contrast, many of the wars featured ongoing skirmishes, small attacks, and a trickle of minor incidents for months or years after each battle.

Today's conflicts are no different.  Low-intensity, protracted conflicts stretch onward into the future.  Major international conflicts and localized internal conflicts seem to never end.  Yet a significant  difference between these conflicts and those of the past is the role of advanced communication technologies and access to simple yet powerful weapons that put small groups on par with massive military forces.

So if wars have messy endings but the mess is bigger these days,  do we defend our cities with the same methods as in the past?  At present we rely upon militant checkpoints, guard towers, road blocks and a whole array of methods intended to restrict movement, obstruct attackers, and provide tactical advantage to one force while negating abilities of the other.  This is all well and good in terms of security, but it does nothing to add finality to the ever-steady trickle of attack incidents.

When fortifying a point of interest, the goal is to focus on utility, with the broad assumption that the newly installed elements are temporary.  Consequently  security architecture is stark and simple, an element that becomes threatening when contextualized by armed guards and interrogations.  The greater problem is that these features are rarely temporary.  Because the hostilities continue, the security infrastructure remains, detracting from the quality of the urban experience and reinforcing the sense of danger.  One could even argue that such infrastructure promotes ongoing militarization and escalates conflict.

To instill finality into contemporary conflict, we must create defensive infrastructure to facilitate a post-conflict urban condition.  We must create security mechanisms that not only satisfy their primary objective, but can contribute to the health and wellbeing of urban living.  Imagine if one day someone in Kabul or Baghdad or Cairo could wake up in the morning and say "remember that police checkpoint that used to be around the corner?  I really miss having it there, it really made walking down the street a little more pleasant."  People make such statements about art, fountains, gardens and landscaping.  They do not say this about barbed wire fences, blast walls, or security installations.

So what should we do? Should we paint the sandbags pink?  Maybe.  It seems absurd, but why not?  Perhaps global society could benefit to emasculate the battlefield.   Discard the drab olive green and replace it with a mural of clouds.  Many could argue that such acts beautify war and devalue its significance, but this is only partly true.  Such acts beautify our environment and celebrate our common humanity,  thus giving an opportunity for peace, otherwise lost, by devaluing the the significance of violence.  It is time to design a new battlefield, not to fight war, but to end it.
at April 16, 2013