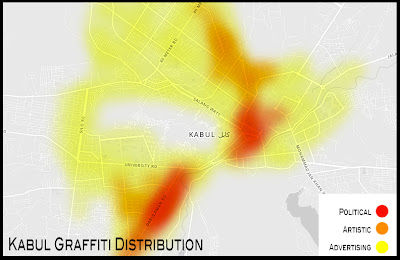 The other day I wrote a post about the use of images to reinforce governance, in particular within areas of instability.  But naturally the question came to mine, if formal imagery can improve governance and order within a place such as Afghanistan, what is the role of informal imagery?  By informal, I refer to graffiti, street art, and ad hoc signage.  I've had a particular interest in the role of graffiti within Kabul since I moved here, as it is a common sight throughout the city and takes on many different forms.

Within Kabul there are two dominate uses of Graffiti.  The most common form of graffiti in Kabul is to advertise businesses and entreprenurial startups.  Advertisements will range from translation services to printers, logistics, security, schools, and technical trainings. Its fast, efficient and can be identified throughout the city even by non-Dari by the string of numbers at the bottom of the text.


The lesser use is as as a form of political expression.  Within 24 hours of atrocities such as the Neruz bombing, anti-Pakistan and/or anti-Taliban messages suddenly adorned the walls of city.  As these messages typically appear overnight and within high-traffic areas, it is rumored that these messages are not the work of an angry population, but are created by government workers.

The least common use is as a form of artistic expression.  Much has been written about the creation of street art by a few young women in the city, admittedly this is an extreme minority. The majority of  these images, such as the stencil of opium poppies at the right are are located in the younger, more hip, area of Taimani which features most of the bars and restaurants where westerns and young Afghans can mingle.

Over several months I've attempted to determine the production of graffiti within Kabul may serve as a cultural vernacular, representing the interests of ethnic groups or political agendas, yet find a large absence of this process.  There is far more interest it seems, to utilize ready-made images, such as posters of fallen mujahadeen, to express tribal allegiances.  It will of course take some time to determine how such images are distributed without the city, or to understand how they function within public space.
at May 24, 2012