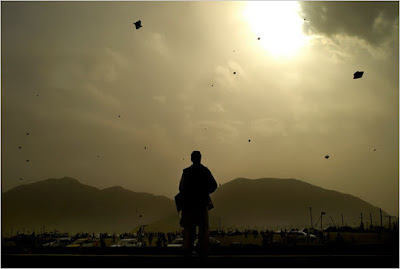 Earlier today I wrote a post about the idea of utilizing drones for urban planning and design. Although little more than a digital camera connected to a flying helicopter, the idea of a personal "eye in the sky" would allow urban planners to collect real-time spatial information for analysis.  However, while this might be an excellent improvement over the traditional use of weather balloons for aerial photography, the high-profile nature of drone research would not be suitable for hostile environments.  As drones vary in size, from large aircraft to small bird-like robots and gliders (or even as small as insects), the role of drones within contemporary combat undermines the ability to use one for spatial urban research.

A couple hours later I was driving through Kabul when I saw some children playing in the street and a new idea struck.

Every night the Kabul skyline is dotted with kites of all shapes, sizes, and colors. Children and adults fly kites at a range of altitudes from the street, rooftops, mountaintops, ruins and street corners.  Kites are a common feature throughout the city and while they lack the specificity of a remote-controlled craft, a sufficiently strong kite and a small/light camera would easily allow one to photograph the city from the sky without objection.  It would not attract any unwanted attention and could be flown at any time of day.  Of course one would need a super small, lightweight camera, but such a thing a possible.   I've seen tiny cameras in big box stores in the US and all over the internet. Acquiring one on the spot in Afghanistan or elsewhere simply requires a little advance planning. 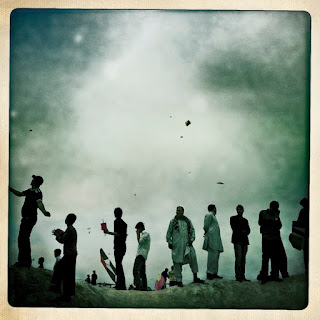 It does raise questions about invasion of privacy, but I would posit it depends on how one uses this strategy.   If it is merely to analyze urban infrastructure and broad social patterns such as traffic, then it really isn't an invasion of privacy any more than google earth.  The only difference is that it is faster, cheaper, and provides more immediate flexibility.

Certainly much work would be necessary to adjust the images into an accurate rendering of the landscape, but ultimately the necessity of accuracy is relative to the demand.  This would not be a good method to map property boundaries or any surveying work, yet it would be a great way to determine times of traffic congestion or bottlenecks.

The idea of using a kite for aerial photography and video makes me wonder as to what other local-technologies might offer for urban research within conflict.  Of course this strategy won't work everywhere, but I am certainly curious about the results this experiment will yield in Kabul in the near future.
at January 11, 2012