For the last 7 years I have labored to understand as much as possible about the city of Mogadishu and to determine viable strategies for reconstruction when the opportunity is presented.  I now have the opportunity to implement these concepts and look forward to introducing simple, yet tangible solutions to many of the city's complex urban planning problems in cooperation with the city government.  Some of the solutions are dependent upon traditional planning and humanitarian initiatives such as concerns with historic preservation and sanitation.  Other concepts are far more innovative, relating to processes in data collection, crowd-sourcing, and GIS.  My business partners and I are presently developing a series of phased low-input, high-input initiatives for the city and will begin implementing these projects in the streets of Mogadishu this March.  I look forward to the project unraveling with some fantastic partners at every step and sharing our progress online.

Yet when I tell others about my work, they often ask, "why Urban Planning in Mogadishu, Somalia?"

The answer goes back a few years to 2004, when I spent 90 days hitch-hiking across Northern India, where I lost my money and acquired malaria in the swampy state of Bihar.    I chose to commit my life to reducing poverty, not with a vague belief that I can make the world better, but rather with the sense that I can make it less inequitable through precise, technical solutions.  It was from that experience I was determined to work in development and to build upon my initial training in art and design through the study of architecture.  After I began my studies, I met Aarati Kanekar, an architect who had worked in post-war reconstruction in Yugoslavia in the 1990s. Upon meeting her, I expanded my studies to go beyond architecture, and to focus on urban planning.

In 2005, I completed my first year of graduate school in Urban Planning and Architecture, and was faced with the seemingly massive task of choosing a thesis topic.  Overwhelmed by the task, I thought hard about my essential priorities and determined that I should attempt to locate, define, and focus my lifework upon the world's most difficult problems, to work for the interest of the world's most marginalized and vulnerable populations as this is where the utmost improvement is needed.  Uncertain how to proceed, I turned to Google.


I more or less typed all of my priorities into Google in hope that it would reveal something new to me. Success.  It was from that simple search that I first learned of the Dadaab Refugee Camps.  Embarrassingly, at 23, I was quite ignorant to the problems in Somalia and knew next to nothing of the decades of violence, famine, poverty, and displacement.   As I began to invest more time into learning about the situation, I came to two conclusions. First,  I decided that I would find a way to go to Dadaab to research and work directly with the problems of refugee camp design and planning. Secondly, I also decided that eventually, one day for whatever reason, that circumstances in Somalia would change and the city of Mogadishu will need to rebuild.


After decades of conflict, it is difficult to be entirely optimistic, but in many ways, the prediction from 6 years ago has begun to manifest.  After al-Shabaab withdrew from Mogadishu several months ago, they have had little success in a multi-front battle against AMISOM/TFG, Kenya, and drone attacks from the US.  Although other forces may have strategic limitations, the fact that Shabaab has continued to change their tactics is evidence of continuing instability on their end.  For the first time since its founding, the Transitional Federal Government has full control of the city of Mogadishu.  With al-Shabaab primarily limited to the Kismaay region, there is even an effort underway to begin relocating refugees from the Dadaab camps back to Somalia. 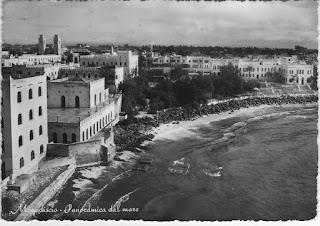 Mogadishu is an ancient city.  Since the 14th Century it has flourished from its strategic location, an epicenter for trade between the Gulf and the Swahili coast.  It is this strategic location that also facilitates regional piracy.  It also serves as an ideal conduit for the trade between internal production and export.  Although dominated by an array of colonial powers over time, from Oman to Italy, it nonetheless retains an internal, structural capacity to again become a major economic hub.  Its urban density, coastal location, european roadways, and interconnection with other cities such as Afgooye or Kismayo have contributed to an urban resilience of the city.  Perhaps one could conjecture that so much physical destruction has taken place in the city because the structural resilience made it too difficult for armed groups to conduct combat, and consequently only through degrading the city could military accomplishments take place.


Now that city is beginning to stabilize and the Somali people are beginning to return to Mogadishu.  With the massive influx of returnees, the city is faced with new tasks.  Jobs need to develop, roads need to be cleared and repaired, sanitation improved, access to water, and systems need to be developed to deal with property ownership and acquisition.  Without the funds to cover the costs, and with the lack of urban planning for a city in conflict, it will require creative and innovative efforts to stabilize and rebuild.  Of course there are greater regional challenges, as many are also returning to Mogadishu because they fear the dangers of living outside the city.   Obviously the key to the success of the city is connected to the stabilization of the region as well.  But for the first time in decades, there is a chance that something can change.  There is an opportunity.
at January 30, 2012