After two decades of watching Somalia collapse on itself and descend only into previously unknown depths of chaos, within 2011 it has dramatically transformed.  Undermined by the famine, al Shabaab has been reduced from a fighting force of about 7,000 to roughly 5,000.  Upon abandoning Mogadishu, the group has returned to their roots, utilizing hit-and-run tactics better suited to their small, agile forces.


Although Shabaab has been reduced, their training and recruitment camps nonetheless to proliferate across the south, near Kismayo.  These camps are designed to instruct youth to use weapons and “feature courses on bomb construction that are taught by al-Qaeda members in Somalia.”  To reinforce recruitment efforts, Shabaab has forced the closure of local schools to encourage students to join the battle against the African Union forces in Mogadishu.  Within a recent African Union report, al-Shabaab’s primary training camp was described as located in “Laanta Buro [sic] village at the periphery of Afgoye [sic] town nearly 40km south of Mogadishu.”


Al-Shabaab Training Camp
I found this al-Shabaab camp in Google Earth by comparing a collection of descriptive sources. The location of Laanta Buur village is described in a 2010 country report for the UK Border Agency.


“Heading beyond Agfoye [sic] in the direction of the coastal town of Merka, there are more checkpoints... at Laanta Buur, I am surprised to see that people can travel safely without fear of being ambushed... at Laanta Buur checkpoint, al- Shabaab militia members search men one at a time...” 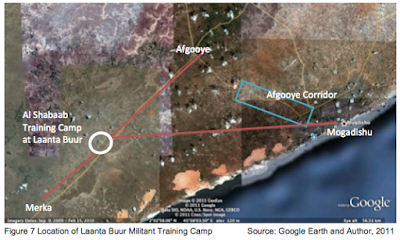 Somalia has only one road leading from the southern coastal city of Merka toward Mogadishu.


Following this road it was possible to quickly determine the location of al- Shabaab’s training camp at Laanta Buur approximately 40 kilometers south of Mogadishu, and within the vicinity of Afgooye. 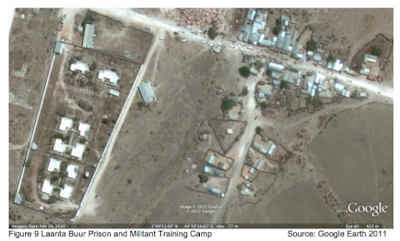 Laanta Buur contains several features that differentiate this space from the nearby towns and villages. Set back away from the primary road between Merka and Mogadishu by roughly 1⁄2 a kilometer, an airstrip runs parallel to the main road.


The airstrip was once a functioning airport known as “K-50.” For many years, when use of the International Airport in Mogadishu was too dangerous, K-50 was a fully operational airport utilized by many aid agencies to transport supplies into the country. In 2008, al-Shabaab took over the K-50 airport and all flights were suspended.


Laanta Buur Prison
Adjacent to the southern side of the airstrip is a series of large concrete buildings in a Modernist style, surrounded by a trapezoidal wall. The wall has two points of entry, one at the northeastern corner, and one at the southeastern corner. Upon closer inspection, one can discern that the surrounding wall features three guard towers on the northwestern wall. 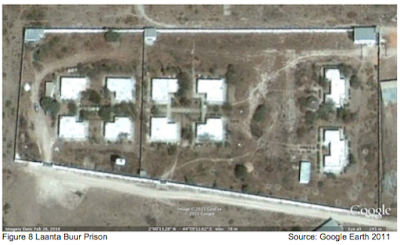 This structure is one of the two infamous prisons constructed by Sayid Barre’s National Security Service (NSS). Constructed by East German engineers in the 1970s, this foreboding structure contains underground solitary confinement cells and was well known as a center of torture and abuse.81 The NSS utilized this prison as a “tool of intimidation, torture, and executions... the occupants of these centers, during this period, were mostly members of the political elite.”

An Amnesty International Report in 1984 described the acts of torture by the NSS at Laanta Buur and the prison of Labaatan Jirow to have included beatings while bound in a contorted position, electric shocks, rape, simulated execution, and death threats. Many prisoners were held in prolonged solitary confinement, and some cells were permanently dark while others were permanently lit, resulting in hypertension and nervous breakdowns among prisoners.


A personal account of time spent at Laanta Buur, Mahumud Yahya described it as a very lonely place, where political prisoners were separated from families, friends, and loved ones and were denied decent food and even reading materials. Each prisoner was left isolated in a large, filthy, rectangular room, empty except for a toilet.  Yahya explains, however, that the one redeeming quality of the prison was the large courtyard, as prisoners at Laanta Buur were allowed to sometimes spend time there in the evening, whereas at the prison of Labaatan Jirow, located near Baidoa, prisoners were forced to spend the entirety of their incarceration in solitary confinement.


Just as Laanta Buur prison was converted into an al-Shabaab training camp, Labaantan Jirow shared a similar history in the 1990s. According to a letter addressed to the UN Security Council in 1992, Labaantan Jirow was a point of operations for the Ethiopian military, which used it as a training camp and weapons storage location. 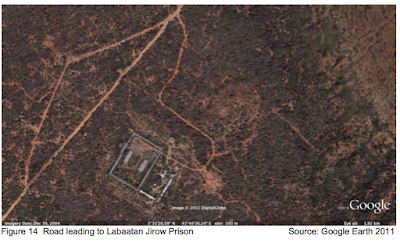 Today, the prison appears to be abandoned, yet examination of the road to Baidoa that passes the prison suggests that it remains avoided as the adjacent roadway forks into an informal detour (with smaller fragmentary detours) to circumvent the prison. The additional time, effort, and challenge of driving through the bush would only be worthwhile if the driver had good reason, such as avoidance of an unseen checkpoint. It is also possible that the haunting memory of the site is enough to redirect traffic.
at December 12, 2011