As mentioned in my previous post,  the most fascinating characteristic about Kabul is the way in which a single space can contain multiple layers of meaning and value.  Social spaces are loaded with complex combinations of use, symbolism, risk, respite, and value.  Yet another intriguing element about Kabul is the manner in which urban spaces are vertically stacked.  This is of course true of all settlements, yet in Kabul, these spaces and their traffic extend arguably higher, far beyond the rooftops. 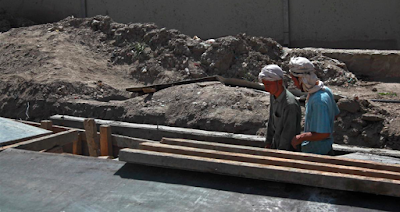 I know there are some underground sewage systems, but these are only in wealthier or new neighborhoods.  For the most part, roadway drainage (about 2-3 feet deep and 1 foot wide) is the most prevalent form of subterranean infrastructure.  Yet given the large quantity of local infrastructure projects, I can only think of the this space, the space below the ground, as an important part of the urban fabric.

As you rise upward, the landscape shifts from the sewers to the streets, which vary tremendously in quality and traffic.  Neighborhoods composed of international agencies and residents are lined with massive walls, hiding families away behind compounds while the average street is comparable to most throughout the world with shops, restaurants and markets.  Dotted throughout the intersections are large defense posts, often adorned with light weaponry and dusty camouflage netting. Overhead is a tangle of power lines and cell phone towers, with mountains in the background.  Political imagery and signage is typically visible, sometimes entangled with advertising and shop signs.  Large posters of President Karzai, photos of political leaders and signs denoting signs of progress dot the roadways. The dust permeates all spaces and layers all structures with a thin velvet layer. 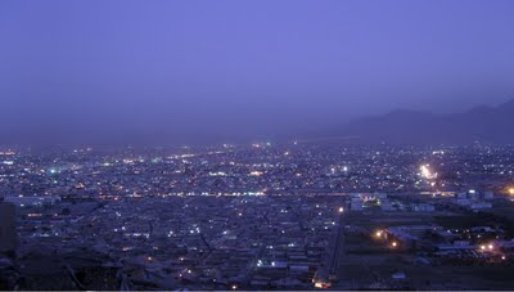 My favorite time of day in Kabul is just a few minutes after sunset, when distances are suddenly squashed by the fuzzy ambiance of light and the hillsides begin to glitter with electricity.  The massive dark mountains begin to flicker and move as all the houses, one by one, light up for the coming evening.  The call to prayer goes out, mixing with the sounds of children and barking dogs floating upward from the streets.  When the sun goes down, the hills abound with the humanity of family life. 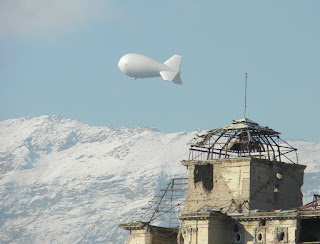 Yet during the day, the hills take on a different sensibility.  Not because the houses, the families, or the people are different, but because in the light of day it is difficult to focus upward eyes upon anything but the large white reconnaissance balloons floating in the sky.  The Eyes in the Sky, large white zeppelin-like balloons called aerostats hover above the city, collecting information from conversations, watching people on the street, and attempting to determine sources of threat from normal social behavior.  Part of me wonders if the data from these balloons is integrated in the DOD's project, Nexus 7, in which complex computational tools attempt to measure common social behavior and extract outlying incidents as a means to predict conflict.

When not focussing attention upon the aerostats, then my vision is often distracted by the helicopter traffic.  Always traveling in pairs, I've quickly learned to distinguish helicopter typologies, and more often, learned that when the sound of chopper interrupts conversation to wait until the second passes before resuming.


I've never been anywhere in which I felt the airspace was as much a part of the general urban space as I have found in Kabul.  So often the energy of a community ends mid-way up the tallest buildings, and yet here it seems to just go onward into the clouds.