Analysis of #alShabaab withdrawal from #Mogadishu; #Dadaab pushed to the Edge 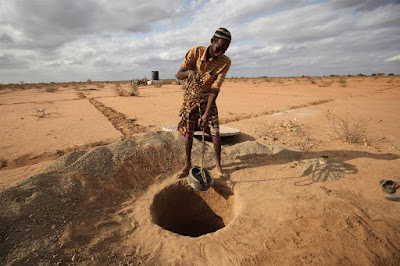 Quite a bit has taken place within Dadaab and Somalia in the last few weeks and it is  difficult to summarize everything.  The Dadaab camps have received a great deal of media attention while the regional draught rages.  Somalia has a long history of internal strife, yet arguably the current draught is far more damaging than past instances as the country no longer contains sufficient infrastructure for aid agencies to deliver services.  The inadequacy of infrastructure prompts dramatic repercussions, not only in terms famine relief but also through the inability to provide broader public health support.  With the surge of displacement, many have been refused admission to the camps, as there are not enough resources available.  The constant influx of refugees also continues to place great strain on the local communities.

Within Somalia there have been a variety of reports on al Shabaab preventing the delivery of aid.  In addition to reports of fake NGOs attempting to take advantage of the incoming aid money, Shabaab has also listed several agencies to be banned with the area for attempting to do more than deliver basic assistance.

Most notably, al Shabaab has withdrawn from Mogadishu. There are still reports of fighting, yet the group publicly announced its withdrawal, citing a change in tactics and to save civilian lives.  The city is not yet safe for return as the group has established checkpoints outside of the city, intercepting returnees for money and recruitment.   It is suspected Shabaab has been heavily affected by the drought and cannot sustain combat within the capital city while some analysts argue that Shabaab suffers from divided leadership.  This is similar to the 2009 when the group withdrew from Kismayo, abandoning training camps and strategic points.


I suspect the withdrawal may be a true change in tactics rather than a sign of loss or weakness. Considering that Shabaab fighters have ambushed AMISOM soldiers sweeping into newly vacated areas, taking advantage of the urban terrain, this may be a legitimate attempt to maximize available resources and keep AMISOM forces off-balance.

Shabaab's quick acquisition of power within Somalia was possible because Shabaab groups concentrated their forces in urban areas where they could utilize transportation and communication resources, tap into ports and markets, and tax local populations.  As the Somalia conflict developed and became more binary between Shabaab and the TFG, Shabaab's approach to conflict became less networked and more one-dimensional.

Since the TFG is a major supplier of arms to non-state groups within Somalia and that unpaid soldiers often sell ammunition for goods, there is a sufficient flow of arms and ammunition throughout the region for Shabaab to continue its military objective yet there must be an adaptation to the changing geography.  Somalia presently has 5 major cell phone providers, populations have shifted from the urban core to the corridors between towns and scattered among IDP camps and Mogadishu only contains a small fraction of its original population.

Amid the geography transformation, Shabaab has grown and annexed territory yet not adapted to the changing resources.  Simultaneously, the conflict has slowly become more symmetric, with Shabaab and the AMISOM forces fighting along a frontline in Mogadishu, utilizing a mixed combat method of hit-and-run tactics and trench warfare.  AMISOM has been working to cover the trenches before any future return by Shabaab troops.

The sudden withdrawal may be a sign of weakness.  Yet it may also be an indicator that the conflict is about to change abruptly, to become something far more unorthodox and challenging than the TFG is equipped to confront.

**Update: Just a few hours after posting this reports have rolled in that multiple attacks have taken place in Mogadishu with al Shabaab utilizing hit and run tactics and hidden explosive devices.
at August 09, 2011