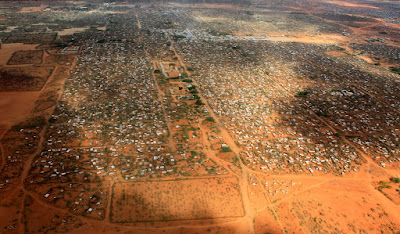 Violence erupted at Dagahaley camp (aerial view above), in the Dadaab Refugee Camps this week.  Rioting was incited when Kenyan police attempted to demolish a Mosque and small businesses.   According to UNOCHA, "Rioting broke out when police sought to disperse a crowd that was protesting an attempt to demolish illegal structures around a food distribution point. Teargas was used, and later live gunshot. Our information is that two refugees were killed and around a dozen injured." 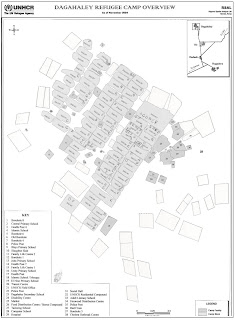 The event raises several questions: for structures to be illegal, what sort of land use laws are in place within the camp? Who determines the legality of these structures?  How does the process work?
As it was Kenyan police attempting to demolish the site, we can assume that the Kenyan government serves as the enforcement body.  Other reports site that the demolition squad was acting on behalf of refugee aid agency that requested the demolition.  The same report cites the Director of Refugee Affairs as having requested the demolition, which is more likely since no aid agency is going to have the ability to use Kenyan Police.  Not to mention, aid agencies are the guest of the host nation, and do not have the ability to declare structures as "illegal" although the state may request the agency to curtail illegal processes.

A question comes to mind however, as the circumstance suggests some sort of zoning law and legal structure to oversee the regulation of land use within Dadaab.  There are planning processes undertaken by UNHCR and the Ministry of Refugee Affairs, as bore-holes, market spaces, and housing blocks are planned within each refugee camp.  In addition, efforts have been taken to relocate many of the settled refugees who occupy low lying land are subject to flooding.  The town of Dadaab and the surrounding camps however do feature a publicly accessible centralized plan nor is there a specific planning office to manage such issues.
In the meanwhile, it is expected that Dadaab will reach a total population of 450,000 by the end of 2011.  Other cities with about the same population size are Cleveland Ohio, New Orleans Louisianna, and Dublin Ireland - yet those cities all have economic infrastructure, transportation, and clean water.  In the meanwhile, thousands of Somalis are stuck living outside the camps, subject to harsh conditions, no water, no food, and violence.  It has been reported that men are working in shifts to guard their families from hyena attacks.  One of the major problems is that the UN refugee registration center is several days journey from the camps, positioning refugees needlessly in the way of danger.
The host government maintains its grip on the land, as the camps are beyond capacity with 370,000 refugees in need of protection. In the meanwhile the extension camp IFO 2, constructed by the Norwegian Refugee Council in 2007 remains mostly empty as the Kenyan Government refuses access to the camp and it remains nonoperational although several ngos are ready to implement services.
at July 02, 2011