Part I of II: Central Place Theory and Informal Economies 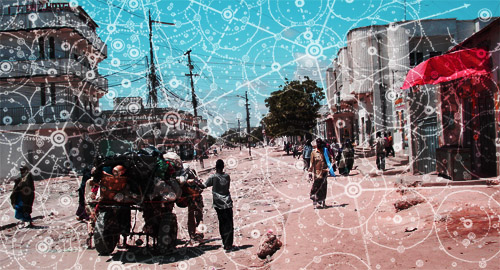 In 1933 Walter Christaller made a ground breaking contribution to the understanding of economic geography with the founding of Central Place Theory.  This theory seeks to explain the spatial structure, scale, and quantity of urban settlements as an inter-connected system.   Determined by studying settlements in southern Germany, Christaller noted that many settlements of similar scale and composition were equidistant from one another.  While his model is founded upon a collection of unrealistic assumptions such as the expectation of markets to function in equilibrium and for transportation between cities to have equal costs, he nonetheless established some valid conclusions.
Christaller determined that each human settlement functions as a central location to provide services and goods from the core to its peripheral threshold.  The distance to that periphery will very for the quality of goods, where as common place items, items of the lower order such as common produce, have a smaller geographic sphere of influence and high order goods - gourmet items -  maintain value across greater distances.  At a certain point, the value of the item reaches a threshold, where it is no longer to the advantage of the consumer to spend time/money to travel the distance and acquire that item.  This  process is also observable within a previous post, wherein I discussed the presence of Coca-Cola as a socio-cultural and economic indicator.  The cost of Coke is high in the center of the city (because of the stronger markets) and as one travels into the hinterland the cost drops until a threshold is crossed and the price begins to escalate due to rarity.  In America or Europe, the threshold would overlap with another marketplace and the cost remains constant.  However in many developing countries, the market reaches its threshold and the product is simply no longer available. Although a product's area of influence is assumably circular from the point of origin, Christaller modified the model as the juxtaposition of circled regions would leave gaps with no service.  By adapting a hexagon, one is able to adjust the scale of the model, isolating single settlements and zooming out to identify how settlements of higher order (large cities such as Chicago, New York, London, Paris) are few and far between, interwoven and interdependent economic landscape. The distribution of markets and market centers reveals that each city center shares 1/3 the market of the adjacent market of equal scale (the K=3 principle); the market of the highest order dominates all adjacent markets, and this dominance promotes efficient transportation of goods by working from a central administrative hub (the K=4 and K=7 principles).


Yet how does this same concept apply to alternative human settlements?


Presumably other human settlements function in a similar manner.  The same geometric spatial pattern may emerge among administrative centers or military bases while an inversion of central place theory also highlights urban settlements of tactical significance within a military operation.   Administrative centers and economic hubs may take multiple forms, and it is no surprise that the changing of government regimes, political power, ethnic composition and market transitions often witness the imposition of new systems on top of the previous systems.  Classic examples may be found in ancient cities such as Jerusalem, Rome, and Cairo, however more immediate examples are easily found.  Of course the act is typically symbolic, to display the replacement of power and the dominance of the ruler.  However the process is just as often logistical, as these cities frequently maintain economic advantages.

Recently in Afghanistan, one can find a similar example as an al-Queada militant training camp now functions has a rural development hub, while the primary Counterinsurgency strategy of NATO and US Forces in the nation has consisted of establishing secure administrative centers for reconstruction and development.   In contrast, al-Queda linked militants in Yemen have targeted military bases throughout the south of country at nearly equidistant locations from one another.   Both NATO and the militants are ultimately attempting to do the same thing, but clearly different reasons.
As Central Place can provide insight into the economic sub-structure of a settlement, it also provides tools to illuminate gaps within service provision, governance, and economic markets.

What is unclear however, is the  the role of Central Place Theory within Informal Economies. As informal economies dominate the global south, and illicit economies often function in a parallel or overlapping nature to support militarization and criminal networks, it is unclear how these less measurable systems may comply or conflict with Central Place Theory.  Demand for weapons, drugs, and sex workers is subject to economic constraints, yet these goods are also traded by complex means, often taking great effort to avoid formal institutions and legal authorities.

Please return for Part II of Central Place Theory and the Urban Economy.
at July 06, 2011