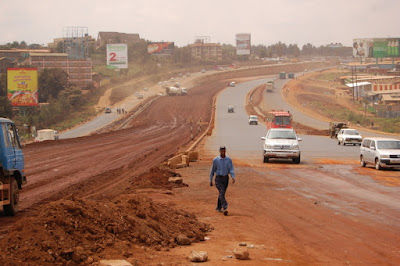 A super-highway through Kenya is under construction, complimented by the development of a new trucking industry and ocean port.  Chinese investment in the region is spurring such projects, leading the construction of the Thika Road. By expanding an existing route, this development will connect Kenya's local economy with the surrounding region, ease traffic, and facilitate the movement of roughly 80 million people.

The road construction includes the expansion of existing roadways to interconnect the new project with preexisting infrastructure, improving access to universities, cinemas, and the national museum.   It also includes flyovers, underpasses, and a full drainage assemblage. Construction hasn't been entirely smooth, as tensions over hiring processes have led to large scale protests. Many land owners were also dissatisfied to lose their land to the project. The project will take three years and three construction companies to complete the project, but will have large scale impact on the regional economy.

Economist Jeffrey Sachs once stated that one of the greatest projects our world could pursue to overcome poverty is to build an efficient transportation route throughout East Africa, "rather than a two-lane, broken-down road," that presently serves as the only transit corridor from Mombasa to Burundi.  Perhaps the Thika Road expansion is will lead to other such projects, and Sachs' vision will become a reality.
at June 21, 2011