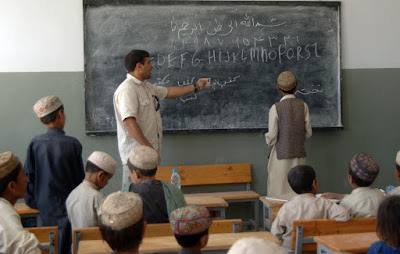 Afghanistan's long history of conflict has deprived youth of  critical education opportunities.  Children in conflict-afflicted countries are more likely to be out of school or to drop out.  Conflicted areas result in extreme disadvantages of poverty and social inequality.  As the bulk of contemporary conflict exists locally, through internal civil conflicts among high-capacity non-state actors, these conflicts frequently target and endanger civilians, further disrupting education systems.  The disruption of daily life, the prevalence of social inequality, and the destruction of local infrastructure and markets from conflict has specifically harmed schools and schoolchildren.  Attacks on schools, the recruitment of children, and the targeting of school infrastructure in Afghanistan have only reinforced poverty and social degradation [UNESCO].

Afghanistan contains two separate eduction systems.  For centuries, traditional religious education was the only available system, until the 1960s when a new, modern education system was introduced with the creation of Kabul University and supporting secular institutions.  Kabul University and nine other post-secondary colleges served the population until the Soviet War and the following Civil War resulted in their downfall.  Between 1996 and 2001, circumstances worsened as the Taliban closed institutions or heavily restricted curriculums.   In 2000, UNICEF reported that less than 5% of Afghan children received a primary school education. Under the Taliban, female education was banned [BBC].
Today in Afghanistan, the World Bank reveals an expanded access to education, with 6.2 million children enrolled and 2.2 female students [World Bank].   Some of these successes can be attributed to large scale programs such as UNICEF's Country Programme Action Plan for 2010-2013, which as continually worked to ensure that Afghani children have the ability to express the rights outlined within the UN Convention on the rights of the child [UNICEF].  Yet there remains a demand for continued improvement such as access to higher education institutions. At present, Afghanistan can only accommodate about 60,000 students leaving Grade 12, while public training technical institutions can only absorb a few thousand [UN].  Education is critical asset to overcome the gap between humanitarian assistance and post-coflict reconstruction.  It serves a need with the initial processes of stabilization, but more importantly, provides mechanisms for long lasting peace and economic development.
at May 29, 2011