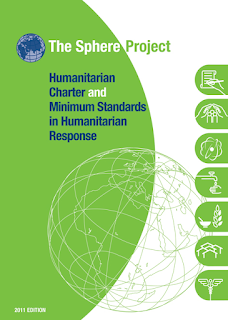 I am quite excited to see that the new edition of the Sphere Humanitarian Charter and Minimum Response standards are coming out this April.  Although the printed edition is not yet available, the pdf is may be directly downloaded from the website here.  After a cursory glance, there is a significant improvement within the new edition, as it presents information in a more concise manner.  The new standards are not perfect of course.  As Under Secretary General of the ICRC says in the video below, there are times that meeting the standards may not be feasible, such as the provision of adquate space for shelter within Haiti, however, it is important that humanitarian actors utilize the Sphere standards to understand the repercussions of planning settlements with overly concentrated density; such as furthering gender divisions and escalating health dangers.

I have a particular interest in the Sphere Settlement Standards, having previously researched the feasibility of such standards to meet the demands of refugee camp planning in a protracted settlement.    My previous research concluded that Sphere lacked the tools to facilitate protracted communities within refugee camps as it did not engage the tools, assets, and networks that developed over time.  Furthermore, I felt that it was insufficient for meeting the needs of populations displaced by violent conflict, as it failed to tie the needs of the population to the pyscho-social conditions of their legal status and departure.  By not considering how the roots of displacement are reflected within new social and settlement patterns, intervening agencies arguably provide less benefit than may appear.
Fortunately the new Sphere Minimum Standards covers many similar issues, or at the very least, many of the of the emerging issues facing the humanitarian community including: civil-military relations, the role of protection and vulnerable populations, a discussion of rapid and long term assessments, monitoring and evaluation, aid worker performance measures, and most importantly, a recognition of the relative values of these standards depending on circumstance.   All of these new tools and frameworks accommodate a more community-centered approach and demonstrates the new Sphere 2011 as a significant improvement.  Of course the real value of its improvement is to be demonstrated over the following years through implementation.
at April 24, 2011