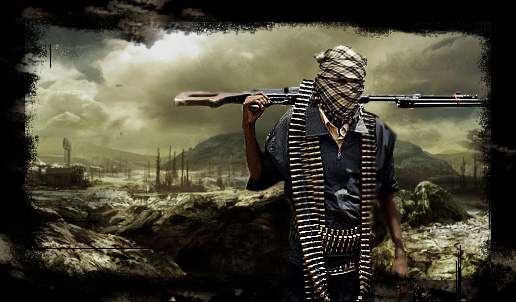 Repost from http://hornofafrica.foreignpolicyblogs.com/ by Mitchell Sipus
Saturday, April 2 7:23 pm EST
Many are familiar with the origin of Somalia’s protracted conflict in the fall of Said Barre’s regime in 1991 and the resulting competition for political control among warring clans.  Yet the conditions of warfare in Somalia have evolved dramatically since that time as the impact of the conflict upon the local geography, the role of humanitarian regimes, and the new found utility of globalization technologies have transformed the nature of Somali warfare.  Not only do tribes fight for territorial power, but factions also battle to control transit and communication infrastructure and points of entry (such as ports and air strips), and to control the inflow and distribution of foreign aid.  The conflict has evolved from a war for political power into a war of capitalism and enterprise.  Tribal leaders are not only warlords, but  entrepreneurs, seeking to capitalize on the geo-political degradation of their nation.
In 2006, when Harakat al-Shabaab began to extend its mandate beyond its original role as the implementing partner of the Union of Islamic Courts, the political system founded by civil society to stabilize the nation under sharia law, al-Shabaab expanded this new model of armed group enterprise.  Receiving funds from global remittance flows, investing in banks to profit from remittance transactions, creating propaganda materials for sale, and later investing in legitimate businesses are fundamental to the workings of al-Shabaab's militant force.  In addition, affiliations with al-Queda and the demand of payments from aid agencies can be interpreted as actions rooted far more rooted in capitalism rather than decisions based on shared/conflicting ideologies.
Ultimately, much of al-Shabaab’s work can be attributed to profiteering, and to extend the model, one could interpret acts of terrorism outside of Somalia as the exportation of a commodity, wherein the resulting conflict is creates new markets for control and profit.  Considering the limited export base within Somalia, a country most known for nomadic pastoralism, piracy, and warfare, the most profitable and peaceful pathways are severely limited.  For example, without a functioning regulatory government to oversee the health and quality of animals stocks, adjacent nations such as Saudi Arabia have no desire to import possibly diseased or contaminated animals.
Without the necessary internal infrastructure to capitalize upon traditional economic assets, the export of conflict quickly becomes the most viable means toward economic success.  To destabilize adjacent regions creates new geographies for exploitation, displays the capacity and power of al-Shabaab among local and distant communities, and creates new points of intersection between armed groups and outside humanitarian actors.
From an economic point of view, acts of regional terrorism  by al-Shabaab, such as bombings in Nairobi, have the prospect of offering only positive prospects for Shabaab as it reinforces their economic base and their image of power.  As African Union forces are already in Somalia, and thus regional nations already participate in the conflict, Shabaab cannot likely accrue greater risks through its actions, only greater economic advantage.  To interpret regional terrorism as a process of phased market expansion, it also explains why acts of terrorism by al-Shabaab have been focused in Kenya and Uganda and have not extended very far elsewhere.  To conduct acts of terrorism in America, for example, will most likely operate at a loss and not created desired profits because it would not have the desried destabilizing impact upon American geography.  Furthermore, to attract greater global attention may ultimately undermine the existing capacity of al-Shabaab who could not contend with American military forces.  Regional terrorism therefore only extends the conflict and its resulting opportunities for profit within a manageable geographic space.
Arguably, the capitalist spirit is the greatest asset of this organization.  To undermine the power of al-Shabaab is not a matter of reinforcing security as much as it is a matter of reducing their economic export potential and thus limit the scope of their market.  Yet as many their market inputs are widely distributed through the migrant diaspora via remittance flows and the outputs are concentrated in the chaotic battlefields of Somalia, a network-centric approach faces tremendous obstacles.  Perhaps a greater means to confront and undermine this force is to examine its weaker components, such as its organizational structure, logistical corridors, and ideological basis.
at April 02, 2011