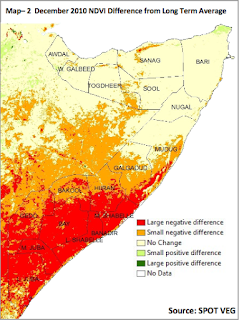 Today I noticed an IRIN  post concerning the present drought in Somalia.  Whereas people in Somali generally depended on water catchments for survival, most of these have dried up and now people are dying, as are their livestock.  Livestock that survives is often too weak to sell.  The most severe water shortages are in the southern regions, where pastoral livelihoods are a critical aspect of daily life.  Somalia's Water and Land Information Management agency, SWALIM, has reported in a recent bulletin that crop production has also been aggressively damaged by the drought.   Production of cash crops such as potatoes and citrus only continue in areas where farmers have access to river irrigation systems.

The draught is expected to last 2 or 3 months until the seasonal rains. Supposedly the draught is forcing people to migrate toward urban centers in search for water.  Accordingly, "Somalis had begun trucking water, 'but it is not nearly enough,'... one water tanker, with 200 drums (each200 L) costs between $200 and $250."  At that cost, 1 liter of water in Somalia is costing over 2 dollars per liter, on par with prices for bottled water in the United States, and it is certainly of much lower quality.

Reading this reminds me of some research I had done a bout a year ago, when it occurred to me one day, "How do people in Mogadishu manage to get water?"  I had asked some friends who grew up there, and they explained that water was purchased from vendors who would transport it via donkey cart.  Looking online, I happened to find an older article that some households have their own personal borehole while donkey cart delivery remains a common practice.  Another common approach is for many families to combine their resources and purchase a larger volume of water that can be then distributed using a pump as needed.  A  family may spend an entire third of their income on obtaining water.
at January 19, 2011