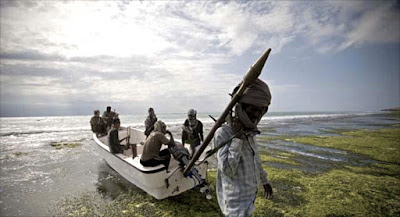 Today a story was released by the associated Press that a 1,000 man army is in development in Somalia's northern region of Puntland to fight against Piracy.  It is funded by anonymous Muslim nations is operated by the private security organization Saracen International.  This immediately brings to mind two points:
1. Saracen International?  Seriously?  Saracen was a an ancient Roman term used throughout the Crusades in reference to Arab and/or muslim populations.  The name stuck around forever, one can even find it in Mark Twain's Pilgram's Progress as he travelled across the Middle East but it continued to be used in a negative fashion.  Considering it carries negative, perhaps even racist connotations, I'm surprised that a mercenary group would name themselves as such.
2. According to Associated Press, Saracen International is the rebranding of the mercenary/private security organization Executive Outcomes.   If you by chance have read the book Dogs of War, you are aware of the attempts by Simon Mann to seize and control distressed African nations.  After he staged a coup in the Canary Islands, he later used  South-African company Executive Outcomes to sieze territorial control in Angola in the early 90s.  Executive Outcomes, and Mann's other venture Sandline International, faded out of the mercenary business sometime around 2000.  However it looks like they're back in business.


In the meanwhile, unknown donor nations attempt to control the piracy problem on the coast, the primary conflict in Somalia continues to escalate and millions of people continue to search for safety.  In the last 3 years a section of displaced peoples from Mogadishu have been establishing a new settlement known as the Afgooye corridor.  Satelite photos have revealed an astonishing degree of settlement recently as the regional violence continues.   I also embedded additional videos below from UNHCR on the Afgooye Corridor.
UNHCR Video mentioning the Afgooye corridor.
at December 01, 2010