The Role of Land Use Laws in Architectural Planning and Design for Reconstruction, Refugee, and IDP Camps

When the earthquake immediately happened in Haiti, I recall having several conversations about the creation of IDP camps and popular criticisms regarding a slow reaction by aid agencies.  Time and again, as natural disasters strike, displaced populations are forced to seek temporary shelter  while various actors struggle to put the pieces beck together.  A key, yet heavily under discussed element of this process, is the role of land use laws and ownership.

Land ownership is a messy situation in impoverished countries, as formal systems of documentation and ownership found in the wealthiest countries simply do not exist, or are incredibly corrupt and complicated.  Economist Hernando de Soto even advocates that much of the world is trapped in poverty primarily because populations lack access to the articles of ownership and leasing of property.  Without deeds, leases, or contacts to facilitate transactions of property, the greatest commodities are the least utilized.   Without these mechanisms, land use and ownership laws vary by culture and economy, such as in Somalia where the traditional Xeer system is founded upon the interests of nomadic pastoralism. In much of Somalia, Xeer works alongside  secular state law and Islamic Sharia law to form a loosely understood system of Somali Common Law.  While it is a challenge for outsiders to penetrate these complex, informal systems, it is often just as difficult for residents to pursue the formal channels of land ownership in their on countries. 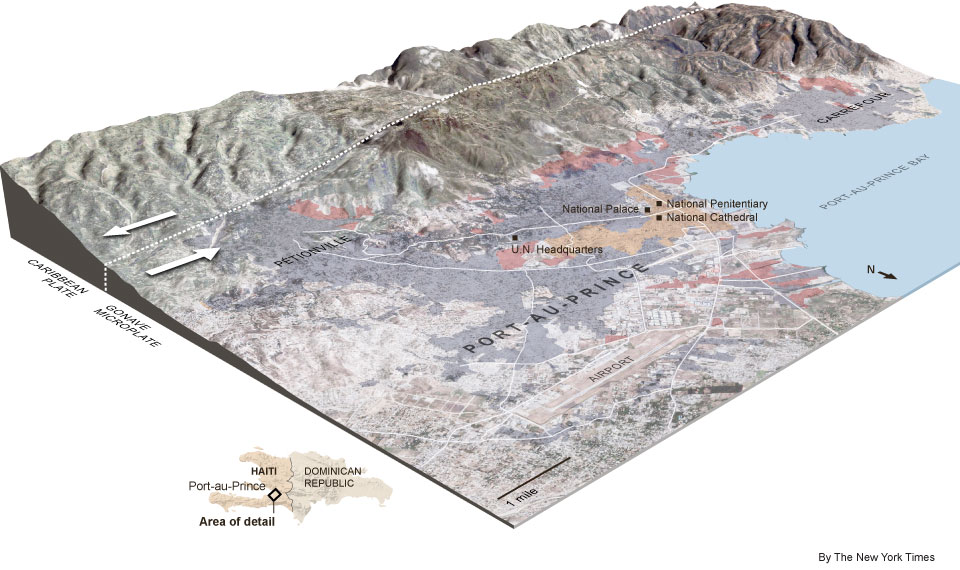 Given the range of land use laws that exist in a single site, it is no surprise that humanitarian action can be slow and difficult.  In an emergency, the rights and regulations of land use and ownership are not suspended, but must be integrated in the recovery process.  This of course does great disservice to the most vulnerable populations, who are left seeking safety along public transportation roots and government land.  To complicate matters further in Haiti, many citizens to not hold land ownership but rent or sharecrop land from an often absent landlord via informal agreements that have been in place for several decades or longer.

If informal arrangements dominate the settlement of displaced persons in Haiti, how can designers, architects and planners advance the reconstruction of Port Au Prince and surrounding regions?  Whereas the city organically developed by means of these loose arrangements, can a western system of design and planning facilitate the reconstruction?   Clearly it is possible to introduce new housing and urbanism solutions, but then a new complication will arise, as it demands the finding and rightful compensation to existing land owners.   Of course this process takes time, and under the constraints of a pending crisis time always appears to be the one resource that is never available.
at December 09, 2010