Finally, a nod to Somaliland 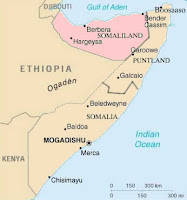 Since the early 1990s,  the Northern break-away states of Somaliland and Puntland have experienced reasonable economic growth and security in great contrast to neighboring Somalia in the South.  Independently established by Somalis who desire no part in the chaos of Somalia, these regions have established a foothold for prosperity with expanding infrastructure and improved living conditions without the support of the United Nations, the EU, or the United States.  Although some humanitarian aid agencies have worked to assist Somaliland and Puntland, these regions have been unable to participate in global trade and have therefore remained economically stunted because they are not recognized as sovereign states.  Instead, dominating policies have supported the struggling efforts of Somalia's president Sheik Sherif Ahmed even though his government can only control 4 blocks of Mogadishu under constant attack from Al Shabaab  militants.

As of today, there might be a glimmer of hope that such narrow and offtrack policies could change.   Consistent with the new US policy on international development laid out by Barack Obama at the United Nations, the United States announced its interest in assisting the people of Somaliland.  Although this is not a formal recognition of statehood, it is a tremendous step in the right direction as it supports the efforts of an active civil society and engages stabilization and development from the bottom up.  As democratic governments cannot be successfully created from the top down, but must be constructed upon the capacities and interests of the populace, the new vow of support from the State Department relays a significant, and enlightened, transformation in approach.

I am greatly pleased to learn of this political shift, as it is also indicative of a greater ideological transformation.  No nation, state, or person exists in isolation in this day and age.  A single household product, such as  t-shirt has a likely history of over a dozen nations in its creation, while the research, development, and production of daily technology such as a telephone or a television required the hands and investment of thousands of people around the world.  From the African mineral mine, to the East Asian research lab, the Indian marketing company, and the German shipping company.  In the same way that products are global, and finance is global, what is lesser recognized is that conflict and poverty are equally global.  The problems of a failed state, a summer drought, or the plight of poverty lead to unimaginable externalities and social repercussions throughout the world.  Unfortunately these problems are often manifest as acts of terrorism, a burgeoning drug trade, regional destabilization and environmental despair.   Ending terrorism and conflict in the contemporary world isn't about removing a particular government from power or killing the bad guys... as there are no leaders or bad guys.  Ending war, extremism, and conflict are instead the results of ending the problems at the root - by ending poverty, expanding education, and supporting the positive actions of those who have already worked so hard to improve the lives of their family and community.  If there is an probable end to Al Shabaab and the violence in Mogadishu, the reconstruction of the state won't start in an office or in Washington, but has already started in the hands of its citizens, in the north, in Somaliland.
at September 27, 2010