The Day I Met Ronald Reagan

Today was intially a very frustrating day.  I stayed up all night, unable to sleep.  I woke up all groggy, and had to bust out the door to Hidayek El Maadi to meet up with the Lost Boys gang.
Except that didn't work out.

I went to the cafe where I had previously met their leader.  It is a well known hang out for Sudanese refugees in that neighborhood, and I assumed I would meet up with them just as before.  Yet no one showed.  I sat, drank a cup of wretched tea (I forgot to ask for Lipton), and after awhile I made a couple trips into the labyrinth of alley ways where our 'school' is located.  Unfortunately I never found any indication that these guys were showing up.  That's fine, as the only frustration is for them to satisfy such low expectation.  However, in my own error, my phone battery was dead and I was unable to call my boss Natalie.  So after an hour and a half of wandering the street and drinking tea, I left.

Here's one of those streets. 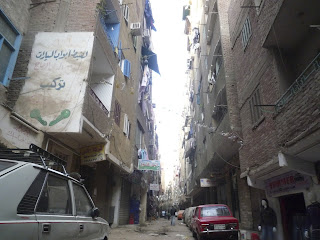 The evening remained overshadowed by my disappointment, only compounded by my usual brooding over my life in Cairo etc.  Then at 8:27 the telephone rang.

This guy called, saying he was from a group called V.I.P., and that he heard I am a music producer, that I had a recording studio, and that I can write beats for them.  I guess word is getting around about the work I've been doing, and now it seems local hip hop artists are looking to work with me.  This guy happens to work in Garden City, which is nearby, and was just getting of work, so I offered to meet him in front of Hardees.

I walked down there and after a few minutes was shaking hands with this Sudanese rapper.  Upon asking his name he told me "Ronald Reagan."  I smiled, as it sounded like any other goofy street name most of the gangsters have, usually the names of famous rappers in America..  We went inside and sat for over an hour, drinking orange soda, talking about music while I shared with him samples of the work I've made with Unigunz.  I showed him the way I work on my laptop and discussed the philosophy underlying the whole project/partnership.

It became clear that he is excited about this project, and more importantly, he wants me to show him how to do this sort of work himself.  Equipped with his own computer at home, he has spent many hours trying to make his own music and music videos.  He pulled out a flash drive and showed me a video he had filmed and edited himself.   He recorded the video on a hand held digital camera and edited the separate scenes on his PC.  For a guy with limited resources, I think he did a rather decent jobfor the video. Sure, its very rough, but he is definitely doing thebest he can.  He filmed it at place where he works at 5 am so thereweren't any customers, and managed to do all of it by himself.

The only real problem with it is that the music itself was ripped from a very successful musician in America, not only that, but it was a top ten song a few years ago.   At least the lyrics are original, so the first thing we are going to try to do is write an original piece of music to replace the one he has now.

Later on he asked how to spell my name to enter it into his phone.   I told him that its just "Mitch," that I don't have a street name and should probably get one.  Sure - I've thought about forming one - suggestions by friends have ranged from Mizzel to  DJ Abayed Abayed, which means DJ Whitey White in Arabic, but I haven't found anything.  Upon mentioning my lack of street name, the guy looked at me and said, "Yeah, I don't have one either.  That stuff is for Lost Boys and Outlaws, and I don't need that.  My name is Ronald Reagan, and yeah, he was a president, but its just a name."

Realizing that it wasn't a street name, it reminded me how aid workers sometimes name children after the day of the week on which the child was born.  I've met quite a few guys from Sudan named Sunday.  I also thought of a story I heard once from a Sudanese guy about how much his family loved Ronald Reagan because when Reagan was in the White House the family was able to better take care of the children than during any time after.  I wondered about the story behind this guys name, but I decided that I might ask another time.